Ground elder is a pernicious weed but has an interesting history.

Ground elder can be eliminated by digging, or by covering the ground with black polythene to starve the weed of light. It may take several seasons until the ground elder is completely destroyed.

Ground elder “Aegopodium podagraria” is a perennial plant within the carrot family (Apiaceae) that grows mostly in shady places.

The name “ground elder” comes from the so-called similarity of its leaves and flowers to those of the elder plant Sambucus though the two are unrelated. It has various common names such as: herb Gerard, bishop’s weed, goutweed or gout wort, and snow-in-the-mountain. It is sometimes referred to by the names English masterwort and wild masterwort. The species itself is native to Eurasia and was introduced around the world as an ornamental plant much to gardener’s chagrin where it can pose an ecological threat as an invasive exotic plant.

The young leaves were used throughout the Middle Ages as a spring leaf vegetable similar in taste to spinach. It is commonly used as an additive for soup across Europe where the very young tender leaves are preferred as a pot herb.

They are best picked when the plant first appears in early February in the UK, to just before it flowers in May to June time. Leaves picked after this tend to take on a distinctive pungent/acrid taste and has been known to have a laxative effect…so be warned!

Ground elder was also used throughout history as a medicinal herb to treat gout and arthritis… and was a staple plant in most monastic gardens. The monks would boil both leaves and roots together and make a hot poultice which they would apply externally to the skin.

The plant itself is said to have been introduced into Great Britain by the Romans as a food plant unlike in Northern Europe where it was introduced purely as a medicinal herb by the monks.

It can often be found still growing in patches surrounding many monastic ruins in Europe, and descriptions of its use are found among monastic writings, such as those by Hildegard von Bingen. 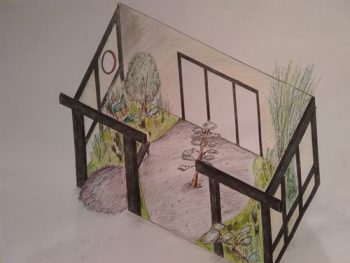